Our Favorite Quote Of The Week ~ “No spring nor summer’s beauty hath such grace as I have seen in one Autumnal face….” – John Donne

The Halloween Box Cake ~ In the early 1900’s, Halloween was truly a family affair featuring a festive family meal. While favorite sweets were certainly on the menu, one traditional treat stands out as truly unique and inspired. At that time, it was fashionable to decorate the Halloween dinner table (it was called supper then) with a make-believe cake made out of pasteboard boxes shaped like pieces of pie, to give the impression of an actual, portioned cake. Each box was filled with a small surprise and covered with white paper or fabric to give the appearance of frosting. At the end of the meal, boxes were distributed around the table and opened to reveal the object within. One of these was a ring. The person who received the ring was blessed with congratulations and wishes of good fortune. One of the boxes contained a fool’s cap. The person who discovered this in their box had to wear it for the remainder of the evening, no doubt inviting playful teasing in the process. 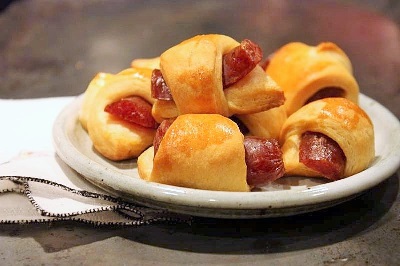 Halloween Menus of the 20th Century ~ Did You Know? Pigs in a Blanket was one of the many traditional selections on the Halloween menu at one time, long, long ago. The 1901 edition of the Blue Ribbon Cookbook features a recipe for the autumn feast, along with recipes for orange jelly and Turtle Sandwiches. In case you did not know, turtle sandwiches are not some spooky version of a turtle between two slices of bread; they are merely a home-made ice cream and cookie sandwich, sometimes with various sweet garnishes added. Spiced pears (that sounds quite good), chicken patties, crab salad, dill pickles, cranberry jelly, salted almonds, cream cheese sandwiches, pumpkin pie and frosted cakes were staples of the Halloween meal in the 1930’s. Vegetable relishes and goblin franks were popular in the 1960’s. This is a turning point of sorts. There is a television in every average home by then, and with this shifting values and activities, along with all manners of publicity campaigns for candy and trick-or-treating. 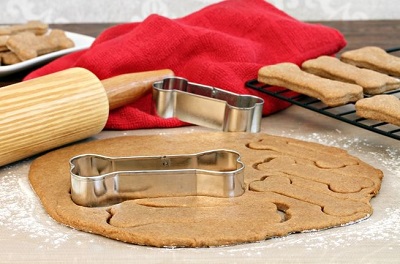 Pumpkin Treats for Fido ~ If you are so fortunate as to count a four-legged, tail-wagging “son” or “daughter” among your children, you probably know they love to be included in seasonal festivities. Of course, with Halloween it can be a bit tricky. You want to make sure that beautiful pup does not get into potentially harmful treats. Cats, as you know, tend to remain stoic in the face of all the Halloween shenanigans. A simple paper wrap from the candy will keep them occupied for hours. Their canine siblings, however, want a piece of the pie. We came across a selection of five easy, dog-friendly recipes to serve through fall. These are suitable for cats too, if your pup does not mind sharing. Pumpkin is an excellent source of vitamins and fiber, and a remarkable source of anti-oxidants. Fiber is also known to help maintain a healthy weight. Get the recipes from the Mother Nature Network. Pick one or try them all… Pumpkin Peanut Butter Treats, Pumpkin Cinnamon Treats, No Bake Peanut Butter Pumpkin Rolls, Peanut Butter Pumpkin Apple Pup-Cake and Pumpkin and Molasses Treats. –