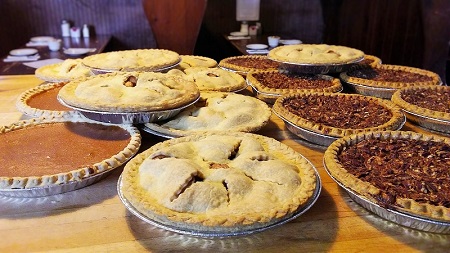 We’re right on the fence between November and December, the last month in our year-long review of Food History Facts. In truth, we barely skimmed the surface, so there is plenty of material left for a new series of flavor-filled articles in January. December is the immediate focus for now. You will hardly be surprised to learn that Fruit Cake and Eggnog are the two foods of the month (in addition to the daily National foods). Whether you personally enjoy fruit cake or not may not affect your appreciation of one little-known fact: The Smithsonian Air and Space Museum in Washington, D.C. features a pineapple fruitcake that traveled to the moon with the Apollo 11 mission (1969). It was returned intact. Perhaps Aldrin and Armstrong did not care for it much.

November 27 is National Bavarian Cream Pie Day – Bavarian Cream may have been an inspiration of Marie-Antoine Carême, the 18th century French chef renowned for his “grandiose style of cookery.” The connection with Bavaria, a southeastern state of Germany, lies in that French chefs frequently worked for Bavarian princes during the 17th and 18th centuries, and may have perfected the confection as a special sweet delicacy for their employers. The original Bavarian Cream differed from plain custard in that it was poured in molds and chilled to set prior to serving. However, it was already used as a pie or cake filling in Chef Carême’s time. The egg and cream mixture was original chilled by immersing the mold in a bowl of ice.

November 28 is National French Toast Day – Clearly, those Romans knew a good thing when they tasted it. They enjoyed a dish called “Pan Dulcis, or “sweet bread” which consisted in soaking bread in milk and frying it in oil. “Pain Perdu” (lost bread) was the common name used in 15th-century Europe, at a time when making full use of all food resources was the original premise behind many traditional delicacies. Many believe that Albany, New York, Innkeeper Joseph French served milk-soaked, fried and sweetened bread around 1724 at his establishment named the dish after himself. North of the US border, they called it “Pain doré,” or “Golden bread.”

November 29 is Chocolates Day – The word “Chocolate” first appears in the early 1600’s, but the cocoa plant was cultivated by the residents of Central America from about 1900 BCE. It was ground and consumed as a beverage then, but the recipe was far more elaborate than usually reported. Indeed, cacao beans were fermented and roasted. Honey, vanilla and even ground chili peppers were added for a potent brew. In fact, it was so remarkable that while 16th-century Spanish conquistadors hoped to find treasures of fine metals in Mexico, cocoa is the treasure that most caught their eye, and they imported it to Europe. The cacao press was invented in 1828 by Dutch chemist Coenraad Johannes van Houten. The rest is sweet history.

November 30 is National Mousse Day – There’s a smidgen of chocolate spilling over here from the previous paragraph. Remember those conquistadors? They brought cocoa to Spain in 1529. Spanish Princess Anne of Austria wedded Louis XIII in 1615. Chocolate crossed over to France for the occasion, thanks to the royal couple’s private Chefs. But the French would first perfect the art of the savory mousse, sometime in the 18th-century. Sweet mousses graced the tables of the well-to-do a century later. These were fruit or chocolate based. One of the first printed recipes for chocolate mousse was published in 1892, in the Boston Daily Globe. Sweet mousses gained in popularity with the arrival of the electric mixer in the 1930’s.

December 1 is National Pie Day – Did you know? Early Americans baked their pies in long rather than round pans, and these were called “coffyns.” This name is a carryover from 12th-century England and France. It means “little basket.” Another common practice was to wrap meat fillings in dough, in effect creating a sort of box around the contents. At that time, as in Roman times (their pies consisted in meat mixtures served on reeds), the filling was consumed, not the casing. Pies have typically been inspired by the ingredients at hand, meats initially, then various fruits. This potpourri of ingredients was reminiscent of the magpie’s habit of collecting objects, and this may be why it’s called a “pie.”

December 2 is National Fritters Day – The apple fritter comes to mind, but this is just scraping the surface. Any deep-fried batter filled with fruit, nuts, meat, vegetables or cheese is properly called a “Fritter.” The Romans enjoyed lumps of dough cooked in hot fat they called “scriblita.” The recipe was introduced to the various European territories they conquered. Our modern-day doughnut is a direct descendant. In Medieval times, wine and ale were frequently added to fritter batter. Later, a 15th-century recipe describes an egg-white and yeast batter a cook would stream through the spread-out fingers of one hand into hot oil to form a tangled web. This was sprinkled with sugar prior to eating.

December 3 is National Apple Pie Day – We discussed pie proper a couple of days ago, so let’s turn to a few uncommon Apple Pie facts. If you believe that Apple Pie is the most popular pie in America, you are absolutely right. Pumpkin is second and pecan is third. When asked what TV Mom would likely bake the best pie, survey subjects (of a certain age) agreed that Carol Brady, of the Brady Bunch (1969 – 1974) was the indisputable top choice. If you have ever eaten the last slice of apple pie and proceeded to deny it, you are probably a man between the ages of 35 and 55. Women are more likely to purchase a pie and claim they made it. At least this is what surveys reveal. Finally, if you know someone who exhibits great compassion, chances are he or she prefers Apple Pie above any other.