October is a perfect month. Why, you ask? October is National cookie month, dessert month, popcorn popping month, pasta month, country ham month and, drum roll please, National Pizza month. What’s more, if it were not for America, there might not be any tomato sauce or tomatoes on modern pizza.

Portuguese and Spanish explorers brought tomatoes from this continent to Europe in the 16th century. Tomato-based soups and sauces became common ingredients in recipes within a hundred years. However, no records exist that would indicate who had the brilliant idea to add tomato sauce or fresh tomato slices to pizza.

The first reference to pizza with fresh tomato appears in print in England around the mid 1800’s. And if we consider the addition of tomatoes or tomato sauce as a shift to what might be considered “modern” pizza, then the Margherita is first in line to grab and honor the title. The original Margherita-style pizza may have featured cheese, sliced tomato and anchovies as its signature toppings.

Prior to this, pizza was a simple flour and water flatbread cooked on a stone and served with oils and herbs. It is one of the oldest breads, dating back to at least 8000 BCE. Cheese making, and thus its incorporation into everyday cooking, does not appear until about 5500 BCE.

Today, pizza is at once treat and delicacy. We love it for the rich combination of flavors it offers, its convenience as a take-out and finger-food and its affordability as a family meal. For thousands of years though, while surely enjoyed for its pleasant texture and smoky flavor, flatbread itself was the convenience, as it served as both base and utensil.

The roots of the name “pizza” reflect this quite pointedly. It has been argued that it comes from an old Latin word for “pie.” However, a more precise assessment of the word places its origin a bit later in time and with old Italian “pizzicare,” which translates to the verb “to pinch” or “to pluck,” referring to the manner in which Europeans and East Europeans pluck food toppings with flatbread wedges or pieces. The word pizza entered common language by the mid-19th century.

Note that the Greeks, rather than the Italians, are credited with introducing pizza-like flatbreads into the common culture of their immediate and extended regions. They served, and no doubt enjoyed, a wide range of toppings on flatbreads, including fruit, stews and vegetables. The toppings were served separately, and the flatbread used as a utensil or base. One might select the desired combination of ingredients for every bite.

It is sometimes said that pizza was the food of the poor, but it would not be so for long. Greek merchants shared their recipes throughout the Mediterranean region. The Romans fell in love and made it their own, thus the strong connection to Italy and the name, pizza. It was prepared and sold widely by street merchants and soon became the most popular (and some say the first) to-go food. It was especially appealing to tourists. So much so that in spite of the lack of anything even remotely as powerful as today’s social media networks, pizza may have been the first most talked about street food in history.

Make a statement with your own pie. Try new toppings. Be daring. If you happen to live around here, or visit, stop by JPD for a pizza extravaganza. Here’s the menu. 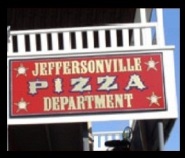 158 Main will be CLOSED for DINNER for at least 2 weeks after Sat, Jan 11th to allow our evening chef time for carpal tunnel surgery and recovery. Thanks for your understanding. 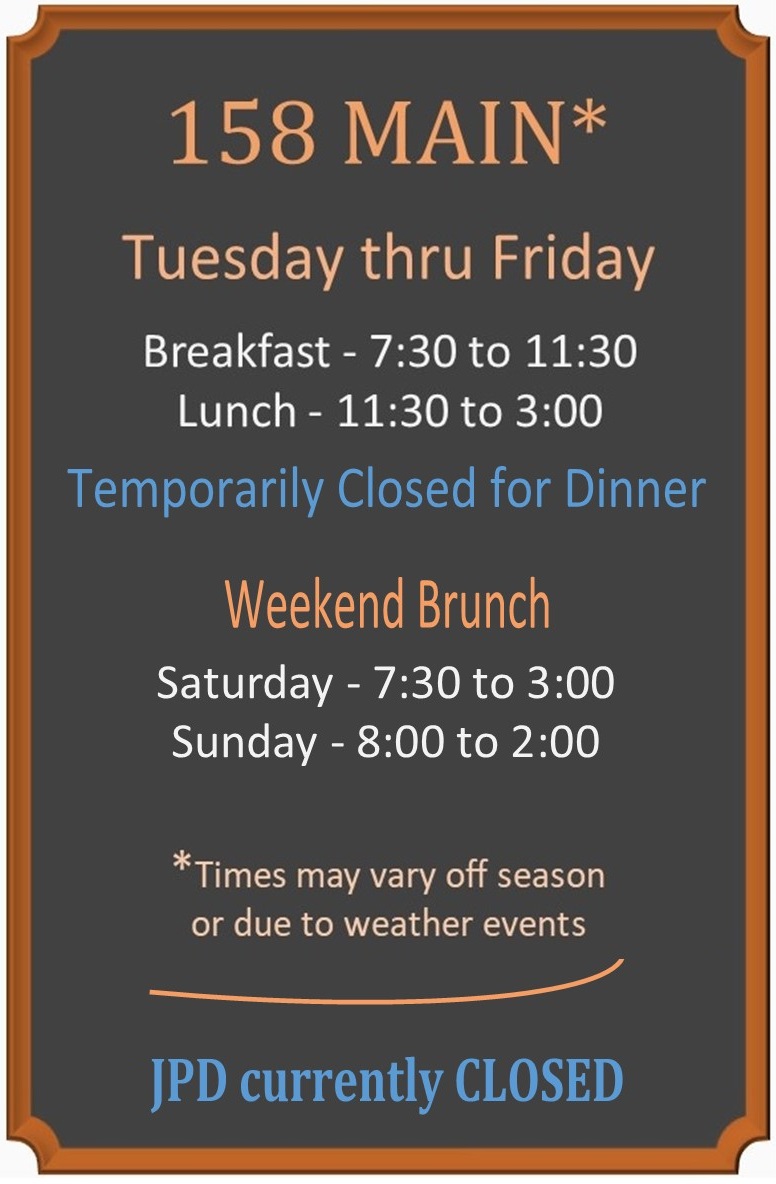