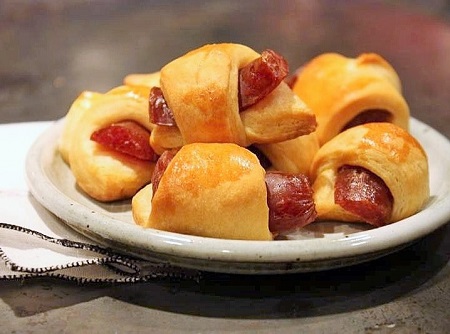 Canapé is the French word for a small, bite-size piece of bread or light pastry with a savory topping served at a cocktail party or on a buffet table. Canapé is also the name for a decorative sofa. Go figure. Which brings us to today’s National Food Holiday: It’s Pigs-in-a-Blanket Day. What’s the connection, you might ask? Well, according to food historians those cocktail sausages rolled in a crust are direct descendants of those fancy Canapés famously served during Victorian times. Now you might ask, what is the pig connection? To answer this, we turn to 1930 and the first American recipe for the appetizer in question, which describes oysters wrapped in bacon. So it would seem the pig was the blanket then, not the other way around. We rather like our bacon stacked between pancakes. And yes, that version of the well tucked in piggies is on our Breakfast Menu.

Now that we’ve contemplated this twisted tale (or twisted tail… pig… tail), let’s see what other goodies have a place of honor this week…

April 25 is National Zucchini Bread Day – First, carrots. Then, potatoes. Then, zucchini. First, pudding, then bread. Indeed, the precursor to vegetable breads was carrot pudding in the Middle Ages, followed by sweet potato pudding in the Renaissance. Zucchini bread is a WWII-era American concoction. Home gardens produced it in excess. Leftovers inspired the now beloved loaf.

April 26 is National Pretzel Day – The earliest known reference to Pretzels is attributed to a text authored by Roman Poet Virgil in the 5th century. One of the possible origins of the name is from the Latin “pretium,” meaning “reward,” later evolving to Pretzel via the German language.

April 27 is National Prime Rib Day – Fat content is the primary criteria when assigning grades to the meats we consume. Intramuscular fat, to be precise. The preferred industry word is “marbling.” The more marbling, the deeper the flavor and moisture. Thus “Prime” rib indicates the highest grade, or most desirable fat to tissue ratio. The grade is established based on observation of the muscle located precisely between the 12th and 13th ribs.

April 28 is National Blueberry Pie Day – Blueberries grow from Alaska to South America. They were consumed and even preserved in seal oil by Alaskan Natives, and common fare for the Native People of America in general. The word “huckleberry” is a New England colonist’s name for blueberry, along with “whortleberry” and “hurtleberry.”

April 29 is National Shrimp Scampi Day – Scampi is plural for “scampo,” shrimp. The term “Shrimp Scampi” could indeed be translated to “Shrimp Shrimps.” It refers to a variety of dishes featuring shrimp, rather than to a single recipe. They became popular in the 1950’s along with other Italian dishes. Interestingly, while the name is of Italian origins, some believe the inspiration for many shrimp dishes came from the famous Dublin Bay Prawn of Ireland.

April 30 is National Raisin Day – Ancient Rome surfaces again as we contemplate the raisin. It was so prized then that it was used as currency. Two jars for a good slave. The massive drought of 1873 left California growers scrambling to salvage some of their crops. A San Francisco entrepreneur is credited with launching the Raisin industry when he decided to sell the shriveled grapes under the name “Peruvian Delicacies.”