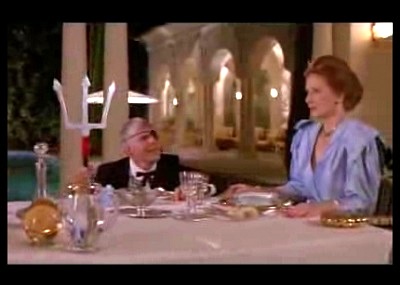 We expect a certain style from Martin and this film delivered exactly that. You can almost tell that the cast savored this particular moment. It is doubtful that it was successfully shot in one take. Steve Martin is an accomplished musician. His sense of timing is clear.

Caine and Martin play a duo of con men who are competing for an American Soap Queen’s money.  They each approach their self-appointed assignment with a personal style. Martin’s character lacks a bit of finish; actually, he lacks a lot. Caine plays a British gent of aristocratic demeanor. The roles fit the actors to a T. The older, accomplished con man takes the younger, cocky American under his wing as an apprentice. He is forced to do so and now must pay the price of dragging his unpredictable partner along, setting the tone for plain, fun comedy.

The soundtrack is far from negligible. It includes Puttin’ on the Ritz, by Irving Berlin. Speaking of music, Dirty Rotten Scoundrels may have been written with entirely different actors in mind, namely David Bowie and Mick Jagger. Can’t imagine! No. This is a Steve Martin film. No one else could fit in those shoes… or pants.