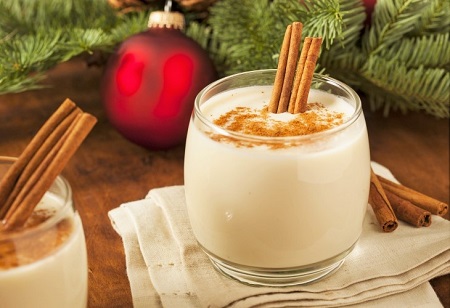 December is Eggnog Month. In Medieval times, people of comfortable means enjoyed a beverage of hot milk curdled with wine, ale, liquor or even hard cider and flavored with spices, sugar and herbs. This was known as a “posset,” and consumed mainly for its perceived medicinal properties. The name “Eggnog” does not appear until the 18th-century. “Nog” may refer to “noggin,” a wooden cup. George Washington once put pen to paper to record his own favorite recipe. It included a whopping 12 tablespoons of sugar, 12 eggs, one quart each of cream and milk, ½ pint each of Jamaican rum and rye whiskey and ¼ pint of sherry. The connection to the Holiday Season emerged in late 17th-century America, as early colonists established farming (eggs and milk) and began to produce spirits.

December 11 is National Noodle Ring Day – Search for the words “Noodle Ring,” and you’ll obtain over 240,000 results and probably 240,000 recipes, but very little as to the origins of the dish or why it is celebrated on this day. Mold concoctions of all sorts became popular in post-Depression and post-WWII homes when housewives began to entertain more in spite of limited means. Food molds added creativity and beauty to an otherwise simple table spread. Makes perfect sense. If you are into sampling original dishes of that time, you may try to get your hands on “Toll House Tried and True Recipes,” by Toll House Inn founder Ruth Graves Wakefield, which features her Toll House Restaurant Noodle Ring.

December 12 is National Cacao Day – Grab your favorite chocolate treat. We’re taking a quick trivia break. It takes 5 years for a cacao tree to produce its first pods, and 4 to 5 months for pods to mature and ripen. There are up to 50 cacao beans in each pod. Cacao beans are covered with a thin, white skin that wears off when the beans are exposed to the air and sun-dried. The pulp that surrounds cacao beans in the pod is edible. It has a lemony taste and is sometimes used in the manufacturing of jellies, jams and juices. Cacao is related to the hibiscus, cotton and marsh mallow, but unlike the majority of fruit plants, flies are its pollinators, not bees.

December 13 is Ice Cream and Violins Day – There is no logical explanation for this unlikely yet festive combination, but who are we to lift our noses at ice cream and soothing music? National Ice Cream day per se is July 15th. December 13th, 2010, marks the date of a significant breakthrough in the music realm. Rock violinist Ben Lee played his violin at over 14 notes per second on that day, breaking the Guinness World Record for the Fastest Violin Player. Perhaps such a feat produces a sort of brain freeze, and the sudden urge for ice cream. Or they all went out for ice cream after to celebrate. A single cow produces enough milk to make 2 gallons of ice cream a day. You are probably familiar with the famous Youtube clip of cows joyfully gathering around a fiddle player in a field. So you see, there is a connection after all, in a twisted sort of way.

December 14 is National Bouillabaisse Day – Bouillabaisse is a true Mediterranean dish and the most popular fish stew in the region, particularly Marseille. The name “Bouillabaisse,” is of French and Provençal origin. It is a contraction of “bouillon abaissé”, meaning “a broth that is boiled and reduce by evaporation.” Ancient Greek writings from the first two centuries AD mention various fish stews. 15th-century Southern Italian cooks made a stew of sardines boiled in wine. Legend has it that the goddess Venus made a bouillabaisse for her dear husband, Vulcan, to help him relax. Upon consuming the delicious meal, he was easily lulled into a deep sleep, allowing her the freedom to spend some time with Mars.

December 16 is National Chocolate-Covered Anything Day – Long gone are the days of consuming a bitter cacao beverage in the hopes of absorbing its medicinal powers. Long gone, as in since 1100 BCE gone. Fast forward to the two most popular chocolate dipped foods: strawberries and peanuts. In 1925, Philadelphia-based Blumenthal Brothers Chocolate & Cocoa Company began producing their famous chocolate covered peanuts they named “Goobers.” The brothers were originally from North Carolina, where goober was a common name for peanuts. In the 1960’s, Lorraine Lorusso, an employee of Stop N’ Shop, Chicago, felt inspired. She dipped fresh strawberries in melted chocolate she allowed to harden before serving to customers. Instant success. In case you were wondering, the peanut M & M was introduced in 1954.

December 17 is National Maple Syrup Day – So, we celebrate their golden gifts while the maple trees sleep. Native American tribes harvested the sap directly from gashes made in the flesh of the trees with their tomahawks. They used boiled down maple sap and maple sugar as a seasoning on foods such as fish and cornmeal porridges. In fact, they preferred maple sugar even after European settlers introduced them to salt in the early 1600’s. One of the earliest references to the Native American practice survived in the writings of French Jesuit settler Father Nouvel, who described in 1671, “a liquor that runs from the trees toward the end of winter and is known as maple-water.” People from the Old World were so impressed because the sugar maple did not exist in their home land.