Our Favorite Quote Of The Week ~ “I regret less the road not taken than my all-fired hurry along the road I took.” – Robert Brault 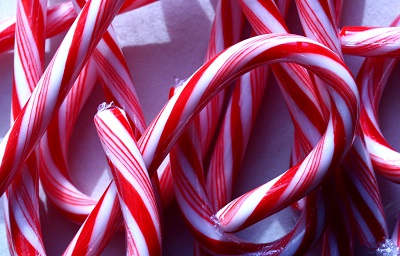 A Wee History of the Candy Cane ~ From a 17th century Cologne, France, choirmaster giving candy to children to entice them to behave to a 20th century American candy maker who made and offered candy sticks to family and friends, the candy cane’s history took on many curves. Many of the twists and turns in its history, which started out as a straight stick by the way, were later proven to me myths. The original candy was all white. This is evident in late 19th century Holiday cards, which feature children with white, stick-shaped candy. It is believed that the red stripes were added only after said candy became popular as a Christmas tree ornament, and thus after it was conveniently shaped to fit that purpose. The stripes appear when Bob McCormack, a candy maker in Albany, Georgia, begins making the confection commercially. Indeed, he would become one of the world’s leading producers of the colorful, shepherd’s crook shaped Christmas time treat.

What’s the Tip on a $200,400.00 Christmas Dinner? ~ The most expensive Christmas Dinner ever recorded was a private four-guest affair, concocted and served in their home by English chef Ben Spalding. The ticket: $200,400. The sumptuous meal was served in 2012. It is not clear whether the pricey, and hopefully tasty affair was subsequently attempted again. Picture this menu: A rare breed turkey with Wagyu beef filet and heart, delicately wrapped in gold leaf (50-carat) and garnished with pistachio. Of course, one would not dive into such luxuriant offerings without a proper toast. The champagne alone cost 59 thousand dollars: a Piper-Heidsieck circa 1907 served in diamond-studded flutes. To his credit, the chef offered to donate most of his fee to charity. As for the tip… There is no mention of such a conclusion, but let’s imagine it at 15%, for a mere $57,615.

The Varnum Food Fare ~ Christmas Caramel Murder by Joanne Fluke ~ Synopsis – “The holidays have arrived, and Hannah and her good pal Lisa have agreed to provide all the goodies for the town’s annual production of A Christmas Carol. But before anyone can say “Bah, humbug!” a Santa-sized sackful of trouble ensues. Like… before the curtains even go up [a cast member] is found dead in the snow—wearing a costume that the real Mrs. Claus would put on the naughty list. Soon after the suspects pile up faster than snowdrifts in a blizzard… it might take a visit from ghosts of Christmas past to wrap up this mystery in time for the holidays…”

Some say “Cheesy.” Others, “A cozy and fun winter read.” Sounds like the perfect choice for a quick read that will transport your mind through a small-town mystery that nevertheless keeps one glued to the couch, book in hand and wine or coffee nearby. Decide for yourself. Get it at the Varnum Memorial Library or your local library. PS: It includes “Over a Dozen Holiday Recipes from The Cookie Jar!”