Our Favorite Quote Of The Week ~ ”

Of Stuffing and Dressing and Forcemeat and Farce ~ Stuffing, is a delicacy well-known to the Romans, and likely numerous civilizations before them. The “stuffing” we know today comes to us from Medieval Europe, where making full use of all edible parts of “food stuff” was a matter-of-fact practice. However, the initial use of “stuffing” consisted in using leftover foods of all sorts, whether vegetable or animal, as filling for pies. These, it turns out, predate dessert pies. Many names have been used besides “stuffing”. The Medieval cook referred to “forcemeat,” the French said “farce” which, incidentally, also means joke. This leaves us with a fine distinction between the terms “dressing” and “stuffing,” used interchangeably in different regions. For the sake of accuracy, note that “dressing” comes into use in the 19th century. It refers to cleaning and preparing a carcass for cooking. Stuffing is the actual mixture we place in the animal’s emptied out cavity, and the act of doing so. 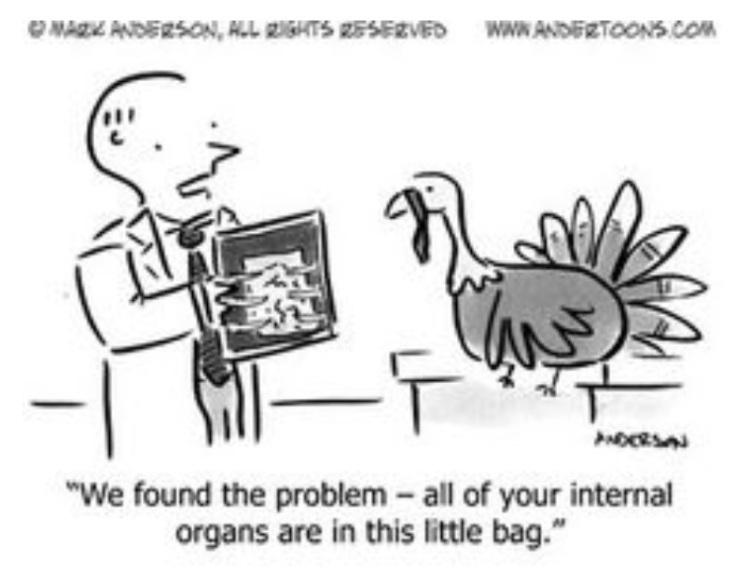 Speaking of Farce… A Side of Humor ~ What would Thanksgiving be, or any family meal for that matter, without a couple of good jokes to light up the mood or fill the gaps? We thought we’d throw in a few cartoons for good measure. They might provide a bit of social media levity in between all the political conversations… However, we did throw in a politically flavored cartoon we just could not resist. Thank goodness for humor.

The butcher just locked the door. As he walks away, a man begins pounding on it, screaming, “Please let me in. I forgot the turkey. My wife will have my head!” The butcher reluctantly lets him in, saying, “Let me see what’s in the freezer.” He returns with a scrawny bird. “Oh,” says the distraught man, “That is way too skinny. Would you have something else?” The butcher takes the bird back to the freezer, waits a few minutes and returns with the same bird. “That’s not much better,” exclaims the man. You better give me both.”

A huge turkey struts unto the field just as the football team finishes their daily practice. As the players watch, speechless, the bird walks straight up to the coach and requests a tryout. The coach agrees and the bird proceeds to catch one pass after another and effortlessly run right through the defensive line. After seeing this, the coach and team implore him to sign up for the season, promising a bonus as incentive. “Forget the bonus,” says the turkey, “I just want to know, does the season runs beyond Thanksgiving Day?”

The Varnum Food Fare: The Spice Bible by Jane Lawson ~ The aroma of traditional spices is one of the great delights of the Holiday Season. These have meaning even to this day and across generations. This, therefore, is the perfect time to explore the full spectrum of spices available to the table. The Spice Bible is “an invaluable resource for anyone looking for a pinch of personality in their cooking—or a dash of inspiration…” a fully comprehensive guide to the fascinating history and enticing culinary uses of 45 fiery foods from around the world. Each entry—from ajowan through wolfberry—includes a description of the spice’s origin and uses, guidelines on how to integrate it into your own cooking, and a trove of other helpful information… more than 250 recipes—for appetizers, soups, entrees, side dishes, breads, desserts, and more—that highlight each ingredient’s distinctive taste and character.” – (Goodreads). Is your mouth watering yet? Run to the Varnum Memorial Library or your local library.