Fricassee: Meat cut into pieces and stewed in gravy.

Fricassee of Words: Musings on food-inspired expressions, words and word play, with occasional bits and pieces of kitchen jargon too.

Don’t stir the pot, go fry an egg, two eggs in a basket are better than one hen in the bush… you get the picture by now, and here is today’s food-inspired expression for us to pick at. 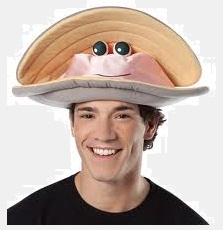 Happy as a Clam

Meanings – A feeling that all is well with the world; a feeling of satisfaction.

It is hard to imagine what a happy clam might look like. A clam cannot smile, so how would you go about identifying its state of bliss. Also, what is it that might make a clam happy anyway?

This expression is said to be strictly American. The earliest record of it is attributed to 19th century American poet John Godfrey Saxe who, interestingly, does not appear to be as happy as a clam himself. Perhaps he was one of those witty individuals who can keep dinner guests in stitches all evening while himself keeping a perfectly straight face.

You might be interested in learning that Saxe is a Vermont native, born in Highgate, at Saxe’s Mill; the first grist mill established in the area by his grandfather, in 1786.

INGLORIOUS friend! most confident I am
Thy life is one of very little ease;
Albeit men mock thee with their similes
And prate of being “happy as a clam!”
What though thy shell protects thy fragile head
From the sharp bailiffs of the briny sea?
Thy valves are, sure, no safety-valves to thee,
While rakes are free to desecrate thy bed,
And bear thee off–as foemen take their spoil–
Far from thy friends and family to roam;
Forced, like a Hessian, from thy native home,
To meet destruction in a foreign broil!
Though thou art tender yet thy humble bard
Declares, O clam! thy case is shocking hard.
~ John Godfrey Saxe

“Happy as a clam,” it turns out, is a diminutive version of the original phrase which stated, “Happy as a clam at high tide.” This referred to the practices employed for clam fishing, specifically to the fact that hunters of clams must wait until low tide to safely dig them out, for at high tide the waters are not safe for gathering them. Hence a clam may feel as though all is well with its world while the high waters keep the fishermen away.

Some years after Saxe’s poem was published, The Southern Literary Messenger, a Richmond, Virginia, magazine, wrote that since everyone knew the meaning of the expression the longer version was not necessary. The high tide was dropped and the clams were still happy.

Interestingly, both Highgate, Vermont and Richmond, Virginia sit several miles inland and away from any happy clam. The expression must have traveled upstream from the fishing community, presumably with merchants.

You’ll find the 158 Main Seafood Chowder on our Lunch and Brunch Menus. Happy baby clams within.