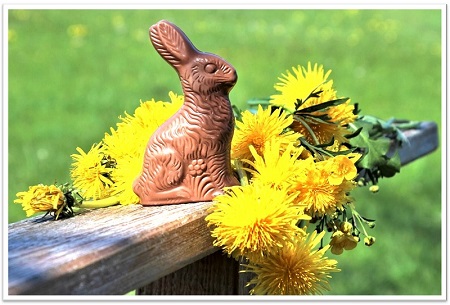 The first and most notorious chocolate bunny was a five-foot tall display in a department store window in Reading, Pennsylvania, in 1890. It was manufactured by the Luden Candy Company, per instructions from shopkeeper Robert L. Strohecker and attracted much business during the Easter Holiday, as intended.

Strohecker was henceforth known as “the Father of the Easter Bunny Business.” His grandson, Ben Strohecker, continued the chocolate bunny tradition (hand-held version) in his own company, the renowned Harbor Sweets Chocolates of Massachusetts. And, of course, the sweet idea multiplied into the shops of chocolatiers and candy makers across the nation and across the ocean.

Rabbits had been a symbol of rebirth and spring in Europe since the Middle Ages, when mere observation revealed their rather impressive rate of reproduction when the snow melted, and the days grew warmer. This is when the custom of dying eggs took roots, as was the egg hunt. Association with children’s good behavior was a common theme as well.

The Industrial Revolution (18th to 19th centuries) was a turning point in the manufacture of candy, and especially in the fabrication of chocolate confections. Chocolate, or cocoa, was already enjoyed in its liquid form, but transforming it into a solid treat required molds and mechanization. The first solid chocolate confections were introduced in Europe around the mid-1800s.

Legend has it that chocolate bunnies are hollow because they used to be filled with candy. This is but a half truth. In 19th century Germany, during the Easter season, decorative rabbits were made out of wood, cardboard and fabric. These often had a removable head so that the body may be filled with various sweets. While this is a recognized precursor to the chocolate bunny treat for children, it did not inspire the hollow bunny directly.

Chocolate bunnies are hollow because hardened chocolate over a thickness of approximately a half-inch is too hard to bite into. You’ve surely noticed how difficult it is to bite the ears off from chocolate bunnies that have a hollow body but filled ears. Hollow bunnies became especially popular during WWII, when such commodities as cocoa were rationed. Requiring less chocolate meant chocolatiers could still produce the beloved treat and children could still enjoy a touch of sweet levity during very challenging times.

The Easter bunny and Easter chocolates delight children around the world. Parents go to great lengths to make Easter baskets and fill plastic eggs with treats for the egg hunt. All these festivities are the stuff of great childhood memories captured on camera and, in this social media age, shared with the world.

But there is something going on behind the scenes that is not so readily shared. In fact, it is done with much secrecy. Can you guess what it is? Chances are you’ve contributed to this covert activity yourself. Over 80% of adults steal Easter candy and chocolate bunny bites from their own children. You know who you are if this brings a smile to your face, and a sudden rosy rush to your cheeks. By the way, did you know that as many as 90% of people insist the ears must be eaten first?