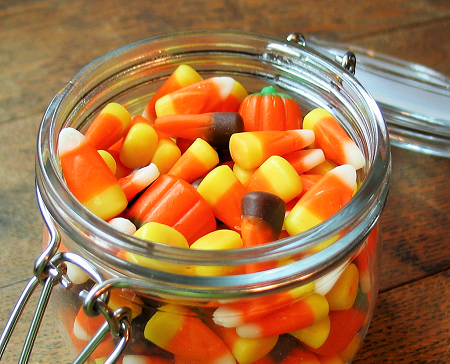 November is National Peanut Butter Lover’s Month. It’s also Raisin Bread Month, Georgia Pecan Month, Pomegranate Month and Pepper Month. In addition to this, November is World Vegan Month and Good Nutrition Month. With Thanksgiving on the horizon, the fall harvest comes to mind. Here in New England, the land offers up a bounty of cauliflower, celery, cabbage, carrots, broccoli, beets, radishes and turnips. The Gilfeather Turnip, a native of Wardsboro, was named Official Vermont State Vegetable on May 24, 2016. It is a hybrid, half-turnip and half-rutabaga, developed by farmer John Gilfeather in the late 1800’s.

October 30th is Candy Corn Day – Candy Corn was originally made by the Wunderle Candy Company, New Jersey (1880’s) and later by the Goelitz Confectionary (1898); the same company that first produced the Jelly Belly Candy. Initially, Candy Corn was packaged in boxes featuring the image of a rooster, and marketed under the name “Chicken Feed.” The tradition of handing out candy for Halloween emerged by 1950. Candy Corn was already associated with fall and Halloween then. Candy Corn flavored Martinis, bagels, Oreos, M & M’s and even coffee are popular variations on the theme.

October 31st is Candy Apple Day – You say “Candy Apple,” we say, “Caramel Apple.” Hmm, not quite the same, actually. The Candy Apple was invented first, in 1908, and while it would seem like a logical fall confection, it was in fact created around Christmas time, by Newark, New Jersey candy-maker William W. Kolb. His cinnamon glazed apples soon became Jersey shore favorites. A Kraft Foods employee is credited with the invention of Caramel Apples. The inspiration for this one came about at Halloween time, 1950, when A Kraft employee experimented with dipping the fruit in caramel from the holiday sales. Did you know, Caramel Apples dipped in chopped nuts or other garnishes are then called Taffy Apples.

November 1st is National Bison Day – European settlers called it Buffalo, owing to the animal’s resemblance to the actual buffalo they knew from their own side of the world. However, the number of bison roaming North America exceeded the buffalo population, dramatically. 70% of today’s continental US was bison territory then. Native Tribes relied on bison more than 10,000 years ago. They made use of every single part of the animal: the meat, sinew, manure, blood, bone and hide. Bison hides, sinew, fat and fur were used to make blankets, clothing, shelter, weapons, rope, fuel, tools and medicine. Bison meat is believed to be the first meat that was sun-dried to make jerky; a most essential source of nutrition for nomadic tribes.

November 2nd is Deviled Egg Day –In Ancient Rome, hard-boiled eggs were doused with a spicy sauce. In Medieval Europe, eggs were stuffed with cheese, raisins and spices. By the late 1500’s, hard boiling was the preferred method of cooking eggs. According to the physicians of the time, this made them more digestible. A recipe for “Farced (stuffed) Eggs” appears in “The Good Housewife’s Jewel,” a 1596 London publication. The practice of replacing the yolk with a spicy mixture became increasingly fashionable by the 1600’s. The term “deviled” appears sometime in the 18th century. Contrary to popular notions, it does not refer to the stuffing, but rather to the spicy seasonings.

November 3 is National Sandwich Day – A well-balanced sandwich is good for you, and it’s a convenient way to enjoy a meal… unless you plan a diamond heist, that is. In 2003, a thief managed to outsmart a state-of-the-art, multi-level security vault in Belgium. He grabbed 100 million dollars’ worth of diamonds and ran. Turns out he was also eating on the run and carelessly abandoned a bite of sandwich near the scene. One key ingredient in said sandwich, his DNA, served as undeniable evidence. Interestingly, the creator of the sandwich, Lord John Montagu, Earl of Sandwich (1718 -1792), was a gambler. Ponder any connection over a 158 Main BBLLTT! Here’s our LUNCH MENU.

November 4 is National Candy Day – The word “Candied” appears around the 17th century and refers to the practice of coating fruit, seeds or nuts with sugar or syrup. So, one would refer to “candied nuts” or “candied fruit” specifically rather than using the term Candy in its broader sense. As confectionery technology evolved, so did our relationship with candy. In antiquity, honey-sweetened fruit were a luxurious addition to lavish meals, but otherwise up until about three centuries ago candied foods were consumed for their digestive aid properties. Fruit preserved in sugar is a derivative, as are the sweet creams that became cake and cookie filling.

November 5 is Doughnut Day – The Doughnut is a variation on the 19th-century American Dutch “olykoeks,” or oil cakes. These were balls of dough, rather than a cake or ring, that were cooked in pork fat. The outside cooked thoroughly, but the inside remained gooey. The practice of filling doughnuts evolved as a tasty solution to the cake’s gooey center. Legend has it that in 1847, American ship captain Hansen Gregory matter-of-factly punched a hole in his doughnuts to avoid consuming the uncooked center. The ring shape was born. Some suggest he merely impaled the small cakes on the ship steering wheel to keep his hands free. The word “Doughnut” appears in print for the first time in Washington Irving’s “A History of New York,” 1809.