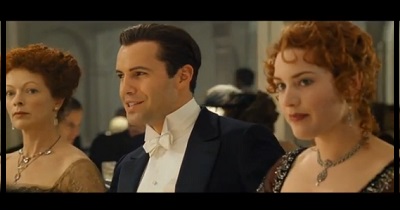 Titanic – 1997 – A fictionalized account of the sinking of the RMS Titanic, staring Kate Winslet and Leonardo DiCaprio. In spite of different social standings, their characters fall in love during the ship’s maiden voyage.

Imagine a stowaway enjoying, the time of a voyage, the amenities and lifestyle his fellow travelers have earned by right of blood and education.  They are confined to a ship, so civility prevails behind raised highbrows.

When asked where he lives, DiCaprio’s character responds honestly, “Right now my address is the RMS Titanic. After that I’m on God’s good humor.” “All life is a game of luck,” suggests a dinner guest. “A real man makes his own luck,” offers another.

The script is true to the social setting of a time when men seem to embrace a more liberal attitude, more playful even, while women find the notion of the free-spirited life rather disturbing. There is an exception, however. Winslet’s character represents a new generation and greater acceptance. A grand voyage must leave room for unique paths, after all.

“You find that sort of rootless existence appealing?” insists one lady. Pause. Discomfort? Not at all. Composure. “Yes ma’am I do,” comes the confident reply.

Director James Cameron wanted to convey the emotional dimension of the Titanic tragedy, before and beyond the actual wreck. He wanted the audience to connect with the human element. The love story and the dynamics of clashing social standings provided the perfect backdrop to convey this.

Titanic was a dream come true, a feat of engineering, a monument in history. How was it, really, to dine on such a ship? One’s thoughts could not possibly remain ensconced in the daily grind. Every man and woman on board had to share a similar sense of awe and wonder; perhaps even the thrill of being wonderfully uprooted.