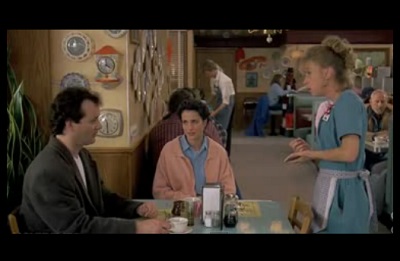 Bill Murray made an appearance in a previous Famous Dinner Scene featuring  What About Bob.

In the present movie, his character returns to the same diner every day, starting fresh, only to notice that it is the same day all over again. Metaphor for life perhaps? At times, we know exactly what is going to happen next, what a friend or family member will do, because this is what they always do in a given situation. At times we are sure we will react a certain way because that is just who we are. Yet there comes a shift and suddenly it is as though we are watching ourselves and the entire world from a new perspective. We know what is coming next and we want to break the pattern.

Groundhog Day was released in 1993. 20 years later, it remains amongst the favorite movies people watch over and over. In this film, Murray plays a Pittsburgh TV weatherman with more than a touch of arrogance. He hates his current assignment and it may be his attitude that throws him for a loop, a time loop that is. He indulges in the moment until boredom and isolation lead him to consider ending his own life, only that is not possible in a time loop. All that is left for him to do is to examine his life instead.

Several scenes take place at the Tip Top Cafe. This location was created for the movie. However, it remained in operation as a real local cafe for several years once production was over.

Groundhog Day received high honors: It ranked 27 on the Writers Guild of America’s list of 101 greatest screenplays ever written and the Washington Post called it, “The best American comedy since Tootsie. In 2006, it was selected for preservation in the Library of Congress.