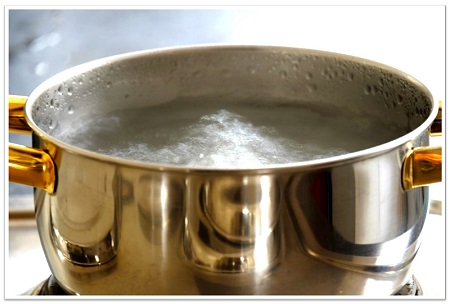 A kettleful of water was set to boil moments before these first words were typed. Just a coincidence, mind you. However, the distance from kitchen to keyboard is but a few steps, the short pause required to gather thoughts was nowhere near the writer’s block long stare, and yet the kettle switch just made its distinctive “click.” The unwatched pot boils at record speed.

The expression, “A watched pot never boils,” is unique in that it was not inspired by a cultural behavior, such as “putting all eggs in the same basket” for example. Instead, it was pure and spontaneous imagery, straight from the creative mind of Benjamin Franklin. And there is more to this twist of fate.

Franklin ascribed the expression to Poor Richard, fictitious character and main protagonist of his popular annual almanac published between 1732 and 1758. Poor Richard was none other than a pseudonym, of course. Thought provoking truths and proverbs, all from Franklin’s observant and industrious mind, were at the core of these writings.

The twist lies in that while the expression is ascribed to Poor Richard by Franklin himself, it does not appear in any edition of the almanac. It was penned long after, in a report he published in 1785 that examined the then popular theory of animal magnetism suggested by Franz Mesmer.

Franklin traveled to France for this exercise, and produced travel notes along with his account of Mesmer’s beliefs and activities. In one instance, he notes, “Finally another Breakfast is ordered. One Servant runs for fresh Water, another for Coals. The Bellows are plied with a will. I was very Hungry; it was so late; a watched pot is slow to boil, as Poor Richard says.”

Of course, we all know that the pot boils, eventually, depending solely on how much water is in it, how deep or shallow it is, altitude and, well, whether we’re paying attention to it or not. And this is the point, precisely. What is often missed when contemplating this boiling question (now that’s a hot pun for ya) is the person standing there, watching the damned pot.

Activity changes time perception. Imagine if you will that you have a sudden craving for your favorite canned soup (delicious with 158 Main’s Homemade baguette, by the way). Two possible scenarios with two very different outcomes follow. Either you just stand by, waiting for the soup to warm up and it takes forever, or you decide to begin folding laundry, thinking you’ll check on the soup in a moment. It seems you barely had time to fold two t-shirts when a familiar sound shifts your attention. The soup is boiling over… already!

And this is why a good kettle has a whistle, so you can stop watching the pot and experience almost instant gratification in the way of your favorite comfort tea or soup.